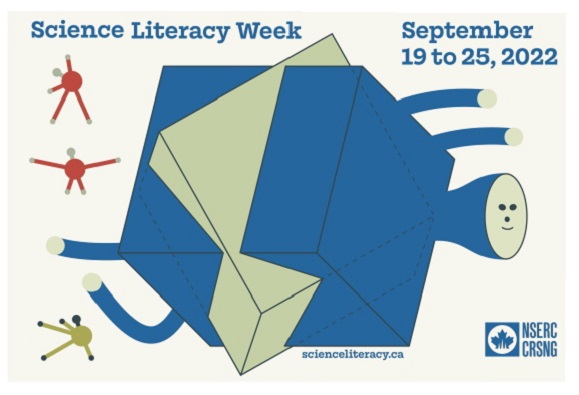 Imhotep’s Legacy Academy has held an annual STEM Quiz Tournament since 2018.  The STEM Quiz Tournament provides African Nova Scotian junior high and high school students with an opportunity to compete in a test-of-knowledge contest on STEM (science, technology, engineering, mathematics) subjects, including biodiversity, inventions and innovations, and achievements of scientists and cultural icons throughout Africa and the diaspora.

ILA’s Science Literacy Week activities are on the theme of mathematics, and will comprise two parts.

Part 1: Hands-on Mathematics Activity for Grades 4-9 learners! Fun Mathematics Activity kits will be provided to all registrants in preparation for the workshop so that students may follow along with ILA Mentors who will deliver the activity in-person and virtually via Microsoft Teams. Those attending virtually will receive a mailed kit once they register. This event is scheduled for Friday, September 23rd, 2022, 5:00pm-6:30pm ADT at the ILA Makerspace (1360 Barrington Street, Sexton Campus). Students may register in pairs (team of 2 players) or individually. Individual registrants will be assigned to a team. If attending the event virtually, the team must meet in-person in their respective location.

Part 2:  ILA will hold an in-person / hybrid STEM Quiz Tournament (Theme: Mathematics) on Saturday, September 24th, 2022, 2:00pm-3:30pm ADT, at the Kenneth C. Rowe Management Building (Rm 1020). The STEM Quiz Competition will be open to students from Grades 6 – 12 of African heritage who register for the event. Students may register as a team of 5 players or individually. Individual registrants will be assigned to a team. Teams will be assigned a Coach if necessary.

ILA will use the Kahoot! platform to deliver the mathematics related questions (e.g., straight answer, multiple-choice, true or false, fill-in-the-blank). Student participants will log-in to Kahoot! to answer questions posed by the Quizmaster.

For answers to any questions, please contact ILA’s Project Engineer, Ms. Nikita Wambyakaley by phone (902-809-6558) or by email (pje.imhotep@dal.ca).

Members of the top 3 teams will receive the prizes below.

Dr. Pemberton Cyrus, PhD, PEng, FEC, is an Associate Professor and Head of the Department of Industrial Engineering, at Dalhousie University. He is President of Imhotep’s Legacy Academy (ILA), a university-community outreach partnership that has led to increased African Nova Scotian participation in some STEM programs by up to 10 times in a 10-year period at Dalhousie. ILA, over 19 years, has grown to reach more than 1500 secondary students each year.

Dr. Cyrus has held senior academic administrative roles, including acting Associate Vice President Academic, where he initiated the “Belong Research Fellowship” that encourages increased research participation among under-represented faculty. During his 11-year tenure as Associate Dean of Engineering, through multiple outreach programs, undergraduate participation by women increased 50%, and Black participation increased many times over. He sits on the Board of Examiners of Engineers Nova Scotia, the Maritime Provinces Higher Education Commission, and is Vice Chair of the Canadian Engineering Accreditation Board.

Professor in the Department of Physics & Atmospheric Science, the co-founder of the Imhotep’s Legacy Academy (ILA) and a former Chair of the Dalhousie Senate.

Dr. Kevin Hewitt is a full Professor in the Department of Physics & Atmospheric Science, and former Chair of Senate (2015-2021) at Dalhousie University. In his Molecular imaging lab, he has developed novel nanoparticle probes for cancer imaging and treatment, new optical imaging approaches and a prototype medical diagnostic tool. He completed his B. Sc., Physics & Biology at the University of Toronto (1992), where he received the UofT Physics prize.
At Dalhousie he unified his deep and abiding interests in science and community engagement by co-founding (in 2003) the award-winning Imhotep’s Legacy Academy, a STEM outreach program for Black students from junior high to university. He’s featured in Cool Black North, a film which explores the unique and vibrant Canadian Black Community and its role in our country’s contemporary identity.

His contributions have been recognized by a Youth Community Service Award (1999), the Harry Jerome Award for Professional Excellence (2014), Nova Scotia Discovery Centre Science Champion (2018), NSERC Award for Science promotion (2021), and the Rosemary Gill award for service to students (2021).

Dr. Tango teaches and conducts applied research at the Ivan Curry School of Engineering, Faculty of Pure and Applied Science. The School of Engineering offers a two-year Certificate (Diploma) in Engineering as well as a three-year Bachelor of Applied Science degree program. Dr. Tango is passionate and believes in educational empowerment through equity, disability and inclusion (EDI) to enrich engaged-learning, innovative teaching and research methodologies for science, technology, engineering and mathematics (STEM) in the University environment. He often works with research assistants/associates in research related to aquaponics systems, bioenergy and biofuels, bioconversion of waste residues for value added products and circular economy. He is also a regular reviewer of manuscripts submitted in several reputable journals, publishes scientific articles in refereed journals and presents technical papers as well as posters at various regional and international conferences.

Dr. Barb Hamilton-Hinch is from the historical African Nova Scotian communities of Beechville and Cherrybrook. She is the mother of three amazing boys. Dr. Hamilton-Hinch is currently employed at Dalhousie University as the Associate Vice President of Equity and Inclusion and an Associate Professor in the in the School of Health and Human Performance at Dalhousie University teaching in the Recreation and Leisure Studies Division as well as the Health Promotion Division. Her work examines the impact of structural, systemic and institutional racism on diverse populations, particularly people of African descent.
At Dalhousie University Dr. Hamilton-Hinch holds a number of positions she is the co-team lead for the Health of People of African Descent Research Cluster with Healthy Populations Institute, she is one of the founders of Imhotep Legacy Academy (ILA-a program that is developed to increase the number of students in Science, Technology, Engineering and Math), co-chair of Promoting Leadership in Health for African Nova Scotians (PLANS a program to increase the number of students of African descent in Health), co-chair of the Faculty of Health Diversity and Inclusion Committee and a number of other committees. She was previously employed as the Black Student Advisor at Dalhousie University, a position she was actively involved in developing in the late 80’s.